The Trump administration’s assault on all things Obama continued last Thursday, as they announced plans to open up approximately 90 percent of US coastal waters to exploration by the petroleum industry. The plan constitutes the single largest expansion of offshore drilling activity ever proposed, according to USA today.

The move negates rules set in place meant to protect regions whose economies depend on wildlife, recreation, and tourism from unintended consequences of oil drilling. These consequences have included disastrous spills like the BP Deepwater Horizon explosion in the Gulf of Mexico, to which these regulations were a direct response.

After the Santa Barbara oil spill of 1969, which was credited with starting the environmental movement, not a single new well has been opened up off of the coast of California. This proposal threatens to change that. Energy companies have long sought to expand their operations in the pacific coast.

The oil industry definitely views this as another huge win from an administration that has shown unprecedented willingness to shape policy that serves their interests. 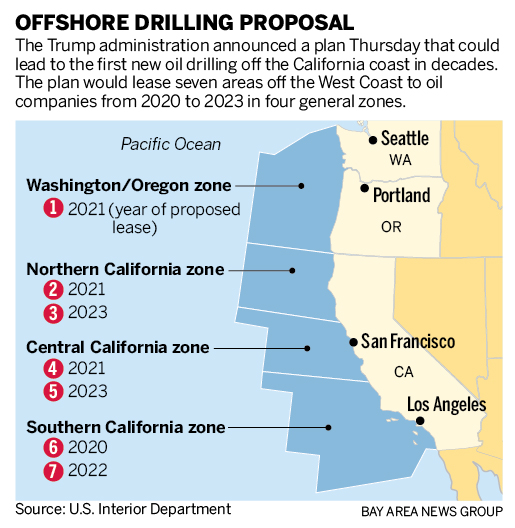 As with most issues involving this president, this is triggering a massive backlash from state and city level governments and activist groups, who will go after this proposal in the courts. Many municipalities currently have laws in place preventing construction of onshore infrastructure that is critical to drilling facilities, and you can expect more to follow suit.

This announcement comes on the heels of the rollback of two key regulations ensuring safety on oil rigs, as reported by Darren Soto for the Miami Herald. Here is a breakdown of the rules affected:

These actions are clear giveaways to energy companies, to whom members of this administration have deep ties. These industries laud the decision, saying that they are being unburdened from unnecessary regulation.

But is that really the case?

It was in fact determined by a bipartisan National Commission investigating the matter that BP had acted criminally negligently, and suffered from systemic failures that caused the safety of the entire industry to be called into question.

These rules, it turns out, were needed. How long until this happens again? How bad will the next spill be?

This is a clear difference between energy weakness and energy dominance. We are going to become the strongest energy superpower. – Ryan Zinke, Secretary of Interior

Speaking in bold and hyper-masculine rhetoric such as this is commonplace for those who make policy in this administration. This is more about setting tone than it is about actual outcomes. This serves as part of a shock and awe campaign, the long term effort to desensitize the public to environmental travesty in the name of corporate profits.

The Republican party has long been waging war on science, pushing climate skepticism, and protecting industries that pollute and create unsafe environments for their workers.

They are now the party of Donald Trump’s “economic nationalism”, in which profits for American companies, under the guise of creating jobs for American workers, take precedence over all other concerns. This bold vision will produce a Nation where workers have the privilege of working for companies who don’t value their safety, and communities that are held hostage by industries, who have no incentive to clean up their messes.

On a societal level, this raises the bigger question of how we consume energy, and interact with the planet around us. It is neither viable nor sustainable to continue to operate as though fossil fuels are an infinite resource.

It underscores the need to ween ourselves off of oil once and for all, and kill the problem at the source. Then we may finally stop repeating the mistakes of the past. Until we do, it’s drill baby, drill…

You can submit comments in opposition to the proposed “Production-Safety-Systems Rule” at the following link: